On and off the dance floor, Douglas Esquire is recognized for his high energy and unique style. He truly cares about making your day special and won’t rest until he’s brought a smile to everyone’s face.

As one of South Florida’s most seasoned emcees, he has hosted some of the top social events in the area and is truly a master of his craft. His interest in entertainment began at a young age, with his love for Michael Jackson and Earth, Wind and Fire setting the tone for his career.

Thanks to his work with the Miami Heat and the Miami Dolphins, Douglas has traveled the world. He’s performed in China, London, Latin America and the Caribbean, adding different cultural perspectives and unique experiences to his playbook.

As a 30-year cancer survivor, charity work is where Douglas’s passion thrives. When he’s not entertaining, he can be found coaching soccer or working as a camp counselor at Camp Fiesta, a sleepaway camp for children with cancer. Douglas believes that his second chance at life should be spent making every moment memorable and helping shape future generations allows him to do so. 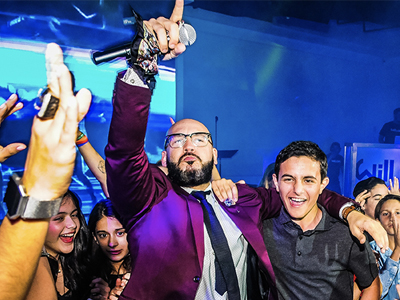